So we’ve hit the time of year when all thoughts turn to autumn and GOSH has just launched its Autumn/Winter additions to the range. I really think it’s a good mix of new products, new shades and new ideas that keeps on delivering for this Danish brand. Let’s take a look!

First to catch my eye was the 9 Shades Eye Shadow Palette in To Party In London. It’s a mix of pearly and metallic shades that’s been inspired by the glitz and glamour of London night life with soft rose, brown and grey shades that suit all skin tones.  They’re highly pigmented and good value for around £11.99. I found the metallic shades to be more glittery than molten but that’s all good for a party look. 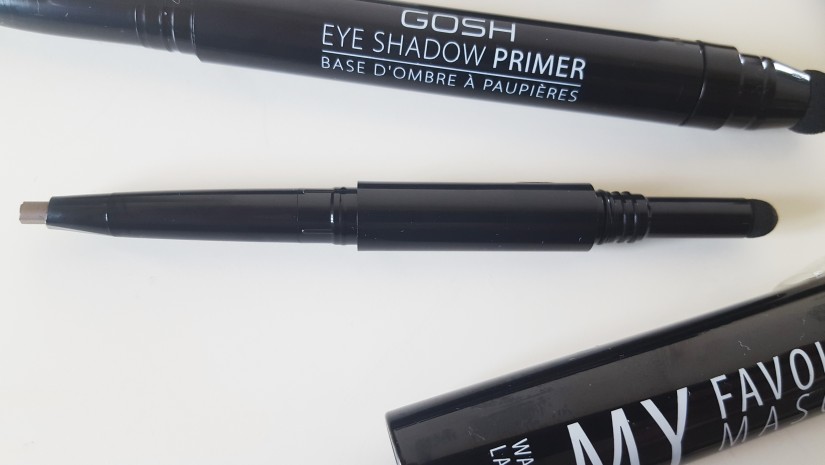 Next up is the Brow Shape & Fill. * This dual ended pencil is so good because it has an angled twist up pencil to line the brow at one end and the other has an applicator to apply the powder in the cap. So much better than having a spooly at the other end and I loved how it applied. The only downside is that there isn’t a shade that suits my very fair brows. Pictured is Grey/Brown. It also comes in brown and dark brown and the cost is £8.99. 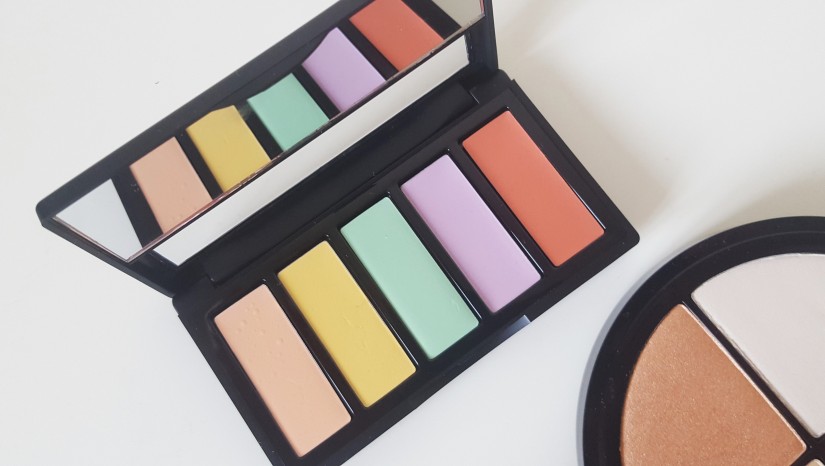 This is a handy Colour Corrector Kit with a mirror in the lid. Uses from L to R are:

I’ve found myself using the yellow under my eyes the most. It’s easy to apply and I just pat on with my ring finger. Price is £11.99

Now this one is new and different. You’ve all probably used eye shadow primers before but they come in squeezy tubes don’t they? This Eye Shadow Primer comes in pencil form with the product at one end that you can apply easily and a dabber at the other end to blend it in. It promises to make shadow stay fresh for up to 24 hours I’ve not tested it for that long but after 16 hours my shadow was exactly where I’d put it at the beginning of the day. It’s priced at £8.99.

This Lift & Highlight is the product that I’m most excited about – not because it’s anything revolutionary, and it certainly could be improved by being twist up and not sharpen but because I’ve never tried highlighting under my brows or in the corner of my eyes. When I tried the lift end under my brows and blended it in with a brush it made an amazing difference to the look of my brows. Also using just a small dot of highlight in the inner corner of my eye really did brighten and I could subtly highlight my cupids bow too. The downside is that this only comes in two shades nude (pictured) and rose that won’t suit darker skin tones. Price is £9.99.

Marketed as an everyday mascara at an everyday price £9.99 My Favourite Mascara  delivers on its promises. It’s not my favourite to be honest but only because I need a little more oomph to make my tiny lashes look amazing. It does have a couple of really good features though with Oak Extract for antioxidant protection and lash health as well as being able to wash it off with warm water at the end of the day. 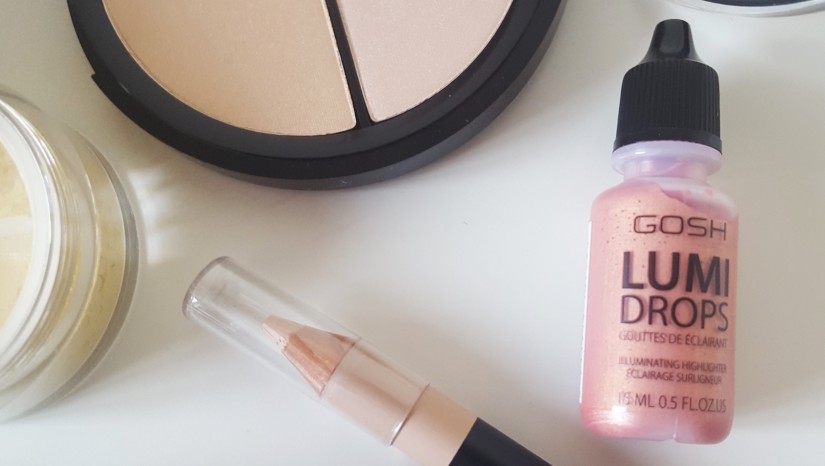 There are two new highlighter shades added to the Lumidrops range. Above is Rosegold and the other is Gold. The Rosegold is very sheer and if you’re looking for some full on gleam then my preference would be the Gold. Saying that, the Rosegold did look amazing on my friends darker skin tone. Anyway, two new choices for you at £7.99 a pop! As well as the usual highlighting uses you might want to think about mixing with your foundation or your body lotion for a summery glow.

There are plenty of banana powders out there but this Prime’N’Set Powder is the first I’ve tried.  Its yellow colour serves as colour correction to neutralise redness and dark circles. It can be used a primer or finishing powder to mattify and helps to make your makeup last longer. It’s in a handy container that stops lets you access just the right amount. It’s been recommended as excellent to use for “baking” (applying your concealer or foundation under a thick layer of powder and how allowing it to “bake” for 30 minutes before dusting off for a flawless finish) but that’s not in my skill set right now so I’ll take their word for it! It’s prices at £9.99. 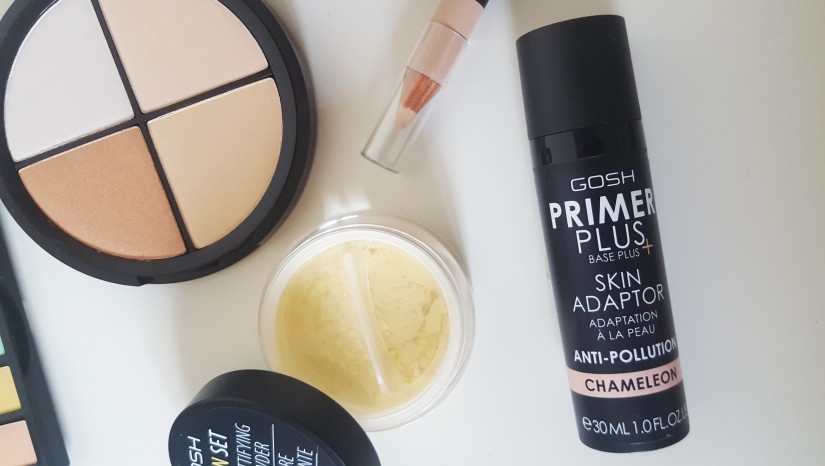 Now this one is really intriguing – it’s the Primer Plus + Skin Adaptor Anti-Pollution in Chameleon. It goes on white but adapts to your skin colour – when you wipe it off you’ll see colour on the your cotton pad! This is because it tiny colour release particles that are activated as you apply it. It tones and enhances the look of your skin to give a healthy glow as well as smoothing, hydrating and protecting with anti-pollution active Cityguard. Again it contains Oak Extract for astringent and oxidant properties. It’s priced at £14.99. 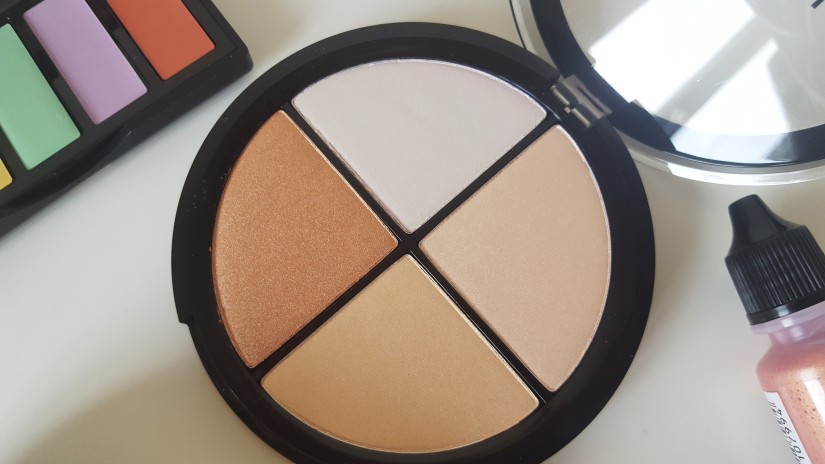 Following the successful launch last year of the Contour’N’Strobe Kits there are two new additions this year with the Strobe’N’Glow Kits in Highlight (pictured) and Blush. Highlight has a holographic highlighter and three golden bronzers; Blush has a white/rose holographic highlighter, two highlighting blushers and a matt blush. I love having four shades in one palette particularly for a night out – if I was being picky I would like to have a mirror included. Price is £12.99.

*This wasn’t noted as a new launch in my press release but there was an item launched that wasn’t included so that might be the reason for a little confusion. So the last item that was launched and isn’t pictured is the 24h Pro liner. It’s a 2 in 1 eyeliner and kohl that you can use in the water line, is waterproof and will last upto 24 hours. It comes with a smudger and sharpener too. Price is £7.99.

Phew that was a long roll call of launch products! What do you think? Are there any that you’d like to try? I think that they’ve done a really good job this season – do you?

Published by Strand On Beauty

Beauty Blogger since January 2014. Love London. View all posts by Strand On Beauty

This site uses Akismet to reduce spam. Learn how your comment data is processed.

And it turned out to be another lucky day for me thanks ro Home Move Box! I won this month's champagne hamper. Off to share it with family now.
AD/PR Thanks to Erborian for sending me such a lovely box of products to introduce me to their range of Korean Skin Therapy!
Starting the weekend right with Thatchers blood orange cider thanks to the Home Move Box Limited!
AD | PR
Mitcham Cricket Green ( Brown?) today. 26 degrees 🌞
Ad/PR sample
Our little home for a couple of nights to celebrate my retirement was Middlethorpe Hall near York. Beautifully manicured lawns and parkland with deer provided an outstanding view from the window. Definitely a change of pace from London life and fortunately the sun shone for us much of the time.
Ad | PR Sample
AD | PR
Loading Comments...
%d bloggers like this: